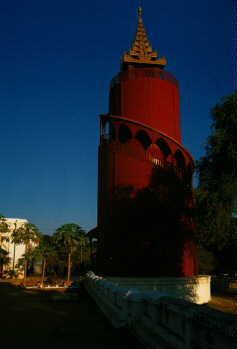 Mandalay was founded by King Mindon in 1857. Most of the monuments there including the palace, the city walls, pagodas and monasteries were built in that year or soon after. King Mindon planned the building of the new capital in 1857 and it was formally inaugurated in 1859. 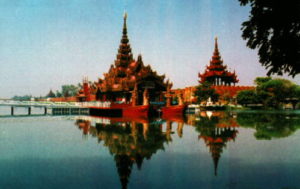 The fortified city is in the form of a square, each side of which is ten furlongs in length, a battlemented wall of brick and mud mortar has a total height of 25 feet and is backed by an earthern rampart. There are 12 gates, three on each side, at equal distances from each other. They are surmounted by pyatthats or pavilions of wood. These total 48 in number. The moat surrounding the city is approximately 225 feet wide and 11 feet deep. Four bridges spanning the moat lead to the main gates. The palace thus occupied the central spot in the city.

The palace, with magnificent woodcarving embellishing it, was destroyed by fire during World War 11. However, the Lion Throne survived the war and is now exhibited at the national museum in Yangon.

Today, Myat-Nan-San-Kyaw Golden Palace in Mandalay has been reconstructed, a monument of historical value, the glory of the Myanmar people — embellished and renovated — is a testimony to the ancient culture.

The city was named after the Mandalay Hill which is situated at the north-east corner of the present city. The hill has for long been a holy mount and it is believed that Lord Buddha prophesied that a great city, metropolis of Buddhism, would be founded at its foot. It was King Mindon who fulfilled the prophesy.

Mandalay, as the centre of Myanmar culture, was outstanding in the past; it holds the stage now; and it will continue to be a place of pride in the future.

Mandalay is situated on the eastern bank of the Ayeyarwaddy River in central Myanmar. It is the second largest city in Myanmar. Towards the east, there are the blue Shan mountain ranges which give the city a physical dignity. To the west there is Myanmar’s lifestream, the mighty Ayeyarwady flowing by.

Mandalay is famous for traditional Myanmar arts and crafts. Two notable ancient crafts — carving of stone images of the Buddha and the manufacture of gold leaf — which continue to be pursued even today, should be of particular interest. To the south of Mandalay, in the neighbourhood of Mahamuni Pagoda, there is a whole street devoted to stone- carving.

Gold leaf manufacture is concentrated in the south-eastern part of the city. It is an occupation that is carried on as a cottage industry. Small bits of gold bullion are laboriously beaten out for days on end to get the required film-like thinness of the leaf. The beating is done by men and the piecing together of the films of gold leaves by girls at the approaches of pagodas. Gold leaf is sold in packets which the devotees buy for gilding the pagodas and the images.

Other notable arts and crafts in Mandalay include woodcarving, ivory carving and gold embroidery. People from Mandalay excel in these arts and crafts. These products are placed among the most popular souvenirs.

How to get there

Mandalay is linked by air, rail, road and river with Yangon and other principal towns of Myanmar. One could choose any one of the four modes of transportation one prefers. It takes only an hour to fly from Yangon to Mandalay and if one travels by train or car, it takes 12 to 14 hours.

When in Mandalay, one should not miss, among others, the Myat-Nan-San-Kyaw Palace, the Mandalay Hill, Kuthodaw Pagoda, Eindawya Pagoda and Mahamuni Pagoda. One should also visit the recently-built Zay-gyo market and various department stores. Mandalay, while retaining its reputation as the home of ancient Myanmar culture and civilization is, today, fast moving to become a busy modern and industrial city as well. 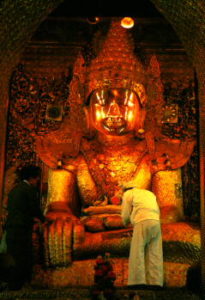 Besides the Mandalay hill, the palace wall, and the palace which is newly built, many other places in Mandalay attract tourists. Visiting the Great Maha Muni Pagoda is among them a top priority, which lies to the south of Mandalay. This pagoda was so named after the holy image, “Maha Muni” housed therein. Originally, this holy image belonged to Myohaung (a town in Rakhine State, the western coastal region of Myanmar).

In 1784, King Bodawpaya (a son of King Alaungpaya who founded the Kon-Baung dynasty) got the image brought by his son to the then royal capital at Amarapura. It has been 210 years, therefore, since the holy image first arrived at the central Myanmar. To the Buddhists in Myanmar, this richly gilded Maha Muni image is not a mere representation of the Lord Buddha but is an icon which is regarded as sacred itself. And the image is also considered to be the greatest in Myanmar next to the Shwe Dagon.

Another celebrated pagoda is the Kyauk Tawgyi situated near the southern approach to the Mandalay hill. It was built in the reign of King Mindon. Also at this pagoda, there is a huge marble image of Buddha which was carved out of a single block of marble. Situated to the east is the Kuthodaw pagoda modelled on the Shwe Zigon at Nyaung Oo. In the precincts of this pagoda, there are 729 monoliths on which the entire teachings of Buddha can be seen as edited and approved by the fifth Buddhist Synod.

The Atumashi Kyaung (which literally means the inimitable monastery ) also is worth seeing. Actually, it is just the ruins partly survived the fire in 1890. However, the remains seen nowadays obviously show that the Atumashi Kyaung must have been indeed an inimitable one in former times.

Moreover,such places as the Eindawya pagoda, the Set Kya Thiha pagoda, the Shwe Nandaw monastery, the old Watch Tower, King Mindon’s tomb, etc. should also be visited in Mandalay. In addition, the old royal capitals prior to the city of Mandalay (Amarapura, Innwa, Sagaing) should also be visited during your stay in Mandalay. And you should not either leave Pyin Oo Lwin (May Myo) unvisited, for it may well be the most pleasant place in Myanmar and even in South East Asia, perhaps. It is situated 69 km to the east of Mandalay, over 1,100 metres in elevation. In the colonial days, Pyin Oo Lwin used to be the summer resort of the Governor.