The Myanmar Delegation led by U Kyaw Tint Swe, Union Minister for the Office of the State Counsellor arrived back to Yangon on 1 March after attending the High-Level Segment of the 43rd session of the United Nations Human Rights Council held in Geneva, from 24 to 26 February 2020.

At the High-Level Segment of the Human Rights Council, the Union Minister delivered a Statement on 26 February 2020, stressing that cooperation with the United Nations is a cornerstone of the Foreign Policy of Myanmar while recalling the duties of the member states mentioned in the Vienna Declaration and Programme of Action and the main purpose of the creation of Human Rights Council. He also apprised the Council of the Government’s effort for peace and national reconciliation, resolving the issues in Rakhine State and ensuring the accountability by domestic judicial procedures.

On the sidelines of the Meeting, Union Minister met with H.E. Ms. OMI Asako, Parliamentary Vice-Minister for Foreign Affairs of Japan on 25 February 2020 and exchanged views on matters related to strengthening the existing bilateral relations, increasing the cooperation between Myanmar and Japan at the multilateral fora as well as possible area of support by Japan in Myanmar’s endeavours in achieving the sustainable solution on the issue of Rakhine State. Subsequently, the Union Minister also held bilateral discussion with Mr. Peter Maurer, President of the ICRC on the same day and discussed on the matters pertaining to the cooperation between Myanmar and ICRC, capacity building programme and humanitarian assistance.

While in Geneva, the Union Minister met with Permanent Representative U Kyaw Moe Tun and staff of the Permanent Mission of Myanmar and their family members on 26 February 2020. 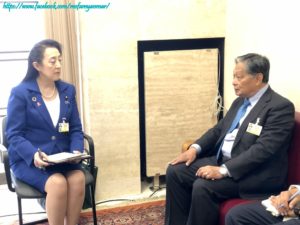 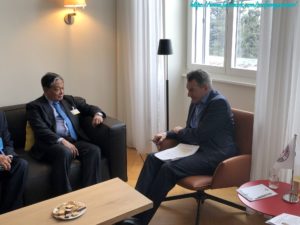