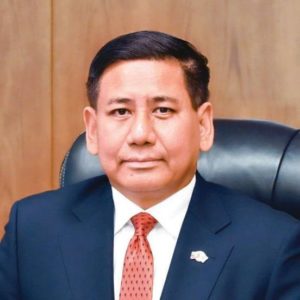 Permanent Mission of the Republic of the Union of Myanmar

to the United Nations Office in Geneva (UNOG)

Ambassador Mr. Myint Thu assumed the post of the Permanent Representative / Ambassador of the Republic of the Union of Myanmar to the United Nations Office in Geneva, Switzerland on 20 October 2020.

Before undertaking this posting, he served as the Ambassador Extraordinary and Plenipotentiary of the Republic of the Union of Myanmar to Japan. Earlier, he served as Permanent Secretary of the Ministry of Foreign Affairs and Myanmar’s ASEAN SOM Leader since 15 November 2017.

He joined the civil service in 1985 as a Subject Matter Specialist at the Myanmar Agriculture Service of the Ministry of Agriculture and Irrigation. He later entered into the Myanma Foreign Service as Third Secretary/Deputy Assistant Director in June 1990 through the Civil Service Selection and Training Board.

He graduated from the Institute of Agriculture, Yezin, with a Bachelor Degree of Agriculture (B.Ag) in 1985. He also earned a Master in Public Administration (MPA) from the Lee Kuan Yew School of Public Policy (LKYSPP), National University of Singapore in 2009.